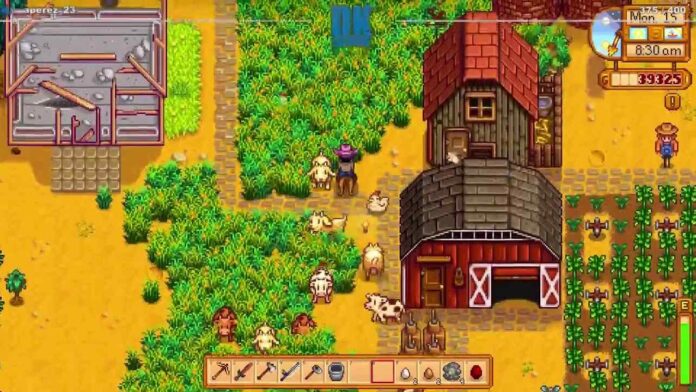 Hay is one of the most important items in Stardew Valley if you want to keep animals on your farm. You need to feed hay to the animals on a daily basis in order to keep them happy.

In order to get hay, you need to choose the right sources. In this guide, we will show you the best way to get the hay in the Stardew Valley game.

Also read: Stardew Valley Do You Think There’s Something Wrong with What I’m Doing

What is Hay in Stardew Valley?

Hay is nothing but dry grass used as feed by the animals in the game. Though these creatures don’t need hay to live, they do need to eat it in order to produce eggs and milk and keep themselves happy. While it may sound like a pain to collect, you can get hay from various sources.

When you farm, hay is not just for your animals; it’s also a source of income. In fact, it’s a major source of income, as animals are naturally drawn to grass. While you can simply feed your animals with the grass on your farm, hay will make the process of farming easier and more fun. If you’re running out of fresh grass, hay is your best option.

In winter, it’s difficult to find hay, and you can’t feed your animals, so you can buy hay from Marnie for 50g instead. To store hay, you can build a Silo. Silos are cheaper than other structures and take up fewer resources. Building a Silo is a good choice, and it is recommended by many veteran players.

The Best Way to Get Hay in Stardew Valley

There are different ways to collect hay in Stardew Valley. The first option is to buy hay from Marnie’s Farm. This is available for 50 gold coins. In the beginning, when you don’t have any resources to get hay, you can buy it from Marnie. It is one of the easiest ways to get hay during the winter. The only drawback is that it is costly.

This is the best way to collect hay. When you build a silo, you can simply cut grass on your farm and get hay. The hay will automatically be stored in the silo. You can store nearly 240 pieces of hay in a silo. The normal scythe only increases your chance by 50%. However, when you use a golden scythe, it will increase the chances by 75%.

Apart from grass, you can cut wheat with a scythe to get hay. When you cut wheat, there is a 40% chance that it will turn into hay. Collecting hay in Stardew Valley is easy once you learn how to collect it.

The best way to get the hay in Stardew Valley is to build a silo. Hay silos can store up to 240 units, which should be enough for your eight animals during winter. If you construct a silo, all the hay you harvest will end up in the silo. This way, you don’t have to buy hay as you can simply harvest it.

Also read: Can You Date Multiple People in Stardew Valley?

How to Build a Silo to Get Hay in Stardew Valley?

If you want to feed your animals on fair days, it’s best to build a silo first. You’ll save time by building your own silo before the cold weather hits. If you’re a new player to Stardew Valley, this may seem like an unnecessary step, but it is one of the most important things you can do to survive.

To obtain hay, you can build a silo on a farm anywhere. Silos are most decorative if you place them on the corners of the farm. It is a farm building that you can purchase from Robin for 100g. In order to build a silo, you will need 100 stones, ten clay, and five copper bars. It will take two days to build a silo. Once it is built, you can easily store 240 units of hay inside it.

You can cut the grass around the silo, which spawns wheat and hay. Once you build a silo, the grass will turn into hay when you harvest it using a scythe. It will help you to make your own hay. Silos are very effective for farmers in Stardew Valley. They are inexpensive structures and save time, especially during the winter. They are also great for keeping your animals fed.

The best way to get the hay in Stardew Valley is to build a silo on the farm. This way, you can use a normal scythe or a golden scythe to cut the grass and turn it into hay. You can easily store 240 units of hay in your silo and use it for feeding animals on the farm.